Cats of the Arctic App Info’s 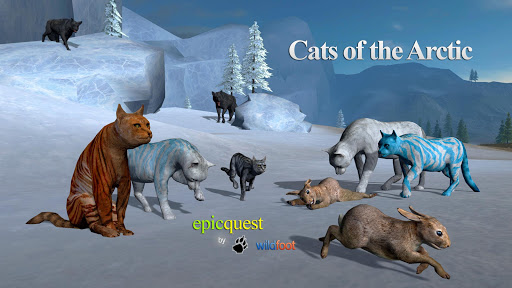 Beware of the Dragons! Be part of the story of this young cat as he discovers his own path across this vast arctic territory. How will the story end? That’s up to you. Make it to the end and see. Dragon, Monsters, Henchmen, and much much more. You will not be disappointed. You have not seen a cat simulator like this.

The story begins with a young cat. Play with some family members, find some food, drink some water, mark some territory, and avoid the enemies. This is the wild land of Dragons, Ice Elementals, magic and adventure. Your Cat will build her skill by completing various quests. Along the way, you will develop your hunting skills. You will need to drink water quite frequently. Be sure to hunt and eat when your hunger level gets low.

We are excited to finally bring an 3D Arctic Adventure game that many of your have been asking for. It is a long form game, with customizable family members, cub training, and magical elements. Collect Gems and Treasure Chests. This game is the second game in our arctic series.

Customization
➤ The app allows you to customize you Cat Color, Markings, and even Call Sound.

Craft Magic
➤ Find the Wizards and Nymphs, Collect the Magic Books, Potions, and Magic Items to Craft your magic spells

Family Members
➤ Locate your family members and use them to team up against your enemies.

Epic Final Battle
➤ The final battle is difficult to win. You will need to use your magic and clan to win the battle.

Epic Quest is a series of games we created at Wild Foot. We’ve taken all your suggestions and tried to combine them into this game. 3D animal simulation at its best.

We would really love to hear from all the Wildfoot fans. Be sure and stop by our Facebook page:  https://www.facebook.com/wildfootgames for updates.   We welcome your constructive criticism. Please email your suggestions. Our focus is making creative games with animals and magic. Animal simulators with something special added. Good luck and have a Wildfoot day!
Updated API’s, other performance improvements