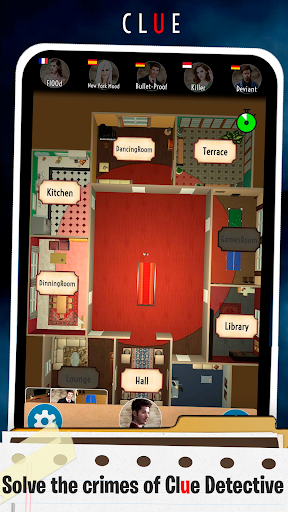 Welcome to the classic adaptation of that family board game. Be a real detective crime on an amazing investigation discovery game for solve who has been murdered! who did it? In which room? and With what weapon?

At the beginning of game, three cards — one suspect, one room, and one weapon — are chosen randomly and put into a special envelope, so that no one can see them.
These cards represents the facts of the case. The remainder of the clue game card are distributed among the players. Discover the criminal in this murdering game online.

How to play
Players roll the dice and move along the mansion entering into the rooms to make supposals and find clues online.

The object is to deduce the details of the murder using the clues, i.e. the clue game card in the envelope. There are 6 characters, 6 murder weapons and 9 rooms. Win on that amazing murdering games hidden objects.

When a detective enters into a room, they may make a supposal, as a real detective game, solve the details of the murdering, naming a suspect, room & weapon. Example: “I suggest it was Black, in the Dining Room, with the candlestick.”

The investigators suggestion must include the room they are currently in.Once a investigator makes a suggestion, the others are called upon to disprove it with clue finding mystery games.

If the detective on the left of the current player has any card of his suggestion, that player must privately show one (and only one) of the board game to him. If not, the process continues clockwise around the table until either one detectives disproves the criminal suggestion.

A player who believes they have determined the correct clue game cards may make an accusation on their turn. The accusing assassin privately checks the three cards in the envelope. If they match the accusation, the player shows them to everyone and wins the clue games hidden objects.

if not, he returns them to the envelope and may not move nor make accusations with the clues of the investigation, discovery game online. Solve the case with clues the criminal game.

Navigating the adaptation of free board game
Suggestions gives a player an advantage to gain information for discover the murdering and clue finding mystery games. Therefore, moving into a new room as frequently as possible is one way to meet this goal to get clues multiplayer fastly.

Making suggestions with clue master detective
A player makes a suggestion to learn with the clues mystery board games free, may be eliminated from suspicion on that crime scene investigation. Each inspectors begins the board game with three to nine cards in their hand, depending on the number of players. Keeping track of game clues master detective are shown to each murders to deducing the murdering crime.

You’ll find an investigation games and crime on your notepad to help you and make this task easier. The notepad can keep not only a history of the clue offline, also finding mystery games are in a player’s hand, but also which clues master detective have been shown by another player.

It be useful in deducing any clue online card. Not be easy to win on that investigation board games and crime board game.

Rooms for clue multiplayer
There are nine rooms in the mansion where the murder can take place, laid out in circular fashion on the game board. Each character starts at the center of the mansion, and can move wherever they want depending on the value of their throwed dice.

Red, Green, Yellow, Black, Purple, Blue. They are all the different suspects available. Choose yours! You can obtain new characters inside this murdering game.

Now you are ready for discover the solution of the murder, make brilliant deductions and solve the crime!
– Minor bug fixes on GUI
– Upgraded Google SDKs
– Performance improvements