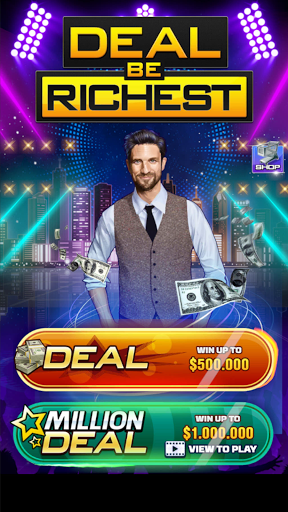 Deal To Be Richest, one of the most fun game is available for download now.

In this game, you become the participant of a TV game show. In this game, there will be 16 cases, which contains different amount of money. You start with a case with an unknown amount of money inside. During the course of the game, you can choose to discard each case one by one. After a few rounds of choosing: 5, 4, 3 rounds respectively, a Banker will show up to propose to buy your case with an amount of money. You will deal with this Banker to decide whether to keep your case and move on, or sell it. At the end of the game, or after you sell the case to Banker, the amount of your case will be revealed.

Luck, skill, observation, all are required skills for the art of dealing.

Sometimes it is not as simple as choose and discard. Luck is involved! Deal or no deal, it is a question but with no actual answer of it own. So you have to decide by yourself, Deal to be Richest.

Be the best dealer and get obtain the highest prizes.