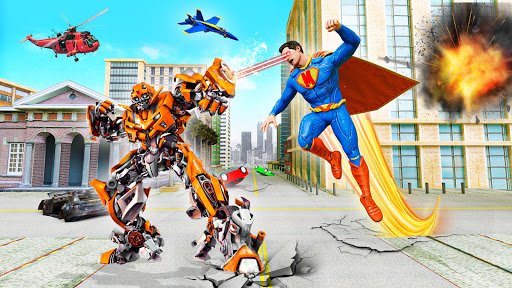 Download this Super Hero Man game and be the superhero man that you always wanted to be. In these free superhero man games, you have many tasks and missions to complete in order to save the city. The modern city of the superhero game has high crime rate. The mobs are beating and looting people in the streets. The mafia controls the higher authorities. There is a gang in the city that is involved in animal smuggling. This smuggling is causing a rapid decline in mammal population in nearby forests. Now, people of this city looks upon you to save them. Be their superhero make this city return to its former glory.

This superhero game has multiple collectibles and rewards to collect. Find these rewards and gain your strength and improve skills using them. With these collectibles and rewards, you can purchase cool stuff like cars, houses and costumes. The graphics of the superhero flying games are more realistic than you think yet it works smoothly in your smart phone. The mini-map of this crime simulator superhero game is organized and easy to understand. You can roam through the open world of this crime simulator superhero shooting game easily with the help of this mini-map.

If you love driving or car games then this car superhero game is great for you. The steering control of vehicles in this fight superheroes game is unlike any other driving game. The game allows you to drive different types of vehicles like SUV, tanks, civil helicopter, military helicopter and more.
So, download this game for free and be the flying superhero of your dreams.
Smooth control, High quality graphic and more powers